Click below to get a .pdf copy of the latest membership form can email it here.

Firstly, I would like to thank like-minded folk who attended the 5th Bee Improvement Day (BID) held at Dobwalls on a very wet, miserable day. The atmosphere inside was far from dull with trade stands and kitchen volunteers beavering away long before most of us had even left home.

So how did it go? Nick Bentham-Green, our Chairperson, made sure things moved at a steady pace, keeping his ‘beedy’ eye on the clock and giving a short introduction to the various speakers.  The order of the day would unfold, trusting the technology would behave itself.

Willie Robson was our first speaker. He is a commercial beekeeper from ‘up country’ at Chain Bridge Honey Farm, Berwick- upon Tweed. We would like to thank Willie and his wife Daphne, for making the long trek down by train on the Sunday prior to the conference to enjoy a little sightseeing of Cornwall and Devon. They also joined a few of the BipCo members and partners for a very enjoyable evening meal at the Hayloft, Liskeard. The food and conversation was excellent and gave everybody a chance to get to know each other a little better ready for BID.

Willie's presentation was very informal, taking the form of a reflection on his journey and experiences in the very precarious business of making a living from producing honey and it's by-products in the inclement Northumbrian weather. Willie soon realised that lady luck had a vital part to play on his journey with so many variable's and mother nature throwing all she could to upset the apple cart. Determination and a strong survival instinct drove him on. Today the hard work has paid off and Willie has a very successful business employing 10 part time and 10 full time staff and over a long time has established a very highly regarded brand name. His 1600 hives continue to do their magic, making their produce which has already been spoken for. Questions were taken from the floor, which prompted Willie to change ‘tack’ at will to answer each subject raised; you can't put this man off his game! His presentation is totally unscripted, very relaxed and was enjoyed by all.

The coffee break gave us all a chance to catch up with those who had ‘gone to ground’ for the winter and to, once again, cross paths with those we seldom meet.

Maureen Wakefield (NBU) travelled down from York by train, hats off to GWR that three people that made it to Cornwall on time, came by rail.

Maureen is, by her own admission, not an expert on apiculture but obviously an accomplished and experienced entomologist and project manager. Some of what she said went a little over my head at times, but that's no reflection on the quality of a really interesting Project, namely SMARTBEES, which she explained with clarity and left us knowing it is in a  safe pair of hands. BipCo is developing an apiary at St Cleer to be actively involved in this European project which should assist us in identifying and protecting our native bees, whilst working together with some structure, which I believe is welcome and timely.

Rodger Dewhurst, a local bee keeper, is actively working with Andrew Brown and Nick Bentham-Green on an ongoing project named B4 (Bring Back Black Bees). He informed us of their work and successes thus far.

B4 have been tirelessly and painstakingly collecting local samples of near native, look alike and bees judged to show real promise. Initially morphometry was used on bees from Cornwall, Scotland, Ireland and the Isle of Man. These samples have then been sent out to Switzerland to obtain the analysis of their DNA to establish the purity of AMM.

Rodger presented the results which confirmed that small pockets exist of near native purity, and he now intends to expand the project and create areas flooded with near native bees. Because there are so few populations of this Cornish Amm, he said that it is vital that we take positive action to increase the numbers of this very rare honeybee.

Eric James, newly appointed Seasonal Bee Inspector for our area, took the opportunity to introduce himself and remind us of the precautions relating to biosecurity both in our clothing and hive tools as well as apiary hygiene.

Lunches were made available and promptly served.  Many thanks to Bev, Steph, Vicky and Ollie for doing such a great job. There was also an abundance of gorgeous cakes, which disappeared almost as quickly as they were put out on the serving counter.

Jo Widdicombe was our last speaker, and informed us of the long awaited mechanism to link the national organisation of BIBBA to more localised needs in different regions across England, Wales and Scotland.  Ireland have formed their own bee improvement group. I think it is fair to say that if BIBBA is to survive and more importantly to have a role to play in conserving the local Amm, then it has to be much more proactive than it is at present

Jo asked for suggestions and opinions to make the way forward to modernise BIBBA and invited all the breeding groups in the South West to keep their own identity but exist under one united banner.

I feel that this could be a discussion point at our next AGM to be held at Duloe Marquee Bar at the village hall on 25th February at 7.30pm. All are very welcome to have your ‘two penny's worth’ and if you feel you want to be involved a little more you can put yourself up for election onto the committee or volunteer to help on some of the forth coming events.

Raffle completed, Nick thanked all concerned in the organisation of such a great day, he thanked the spaeakers, thanked the Trade stands - Beekeeping Supplies, BBwear, and Northern Bee Books for their support, and concluded with a summing up of an enlightening and very enjoyable day. Finally he thanked the 80 (yes 80!) or so Beekeepers who braved the elements to come along. 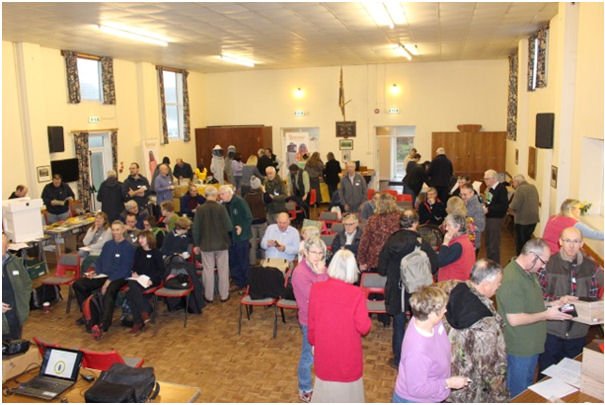 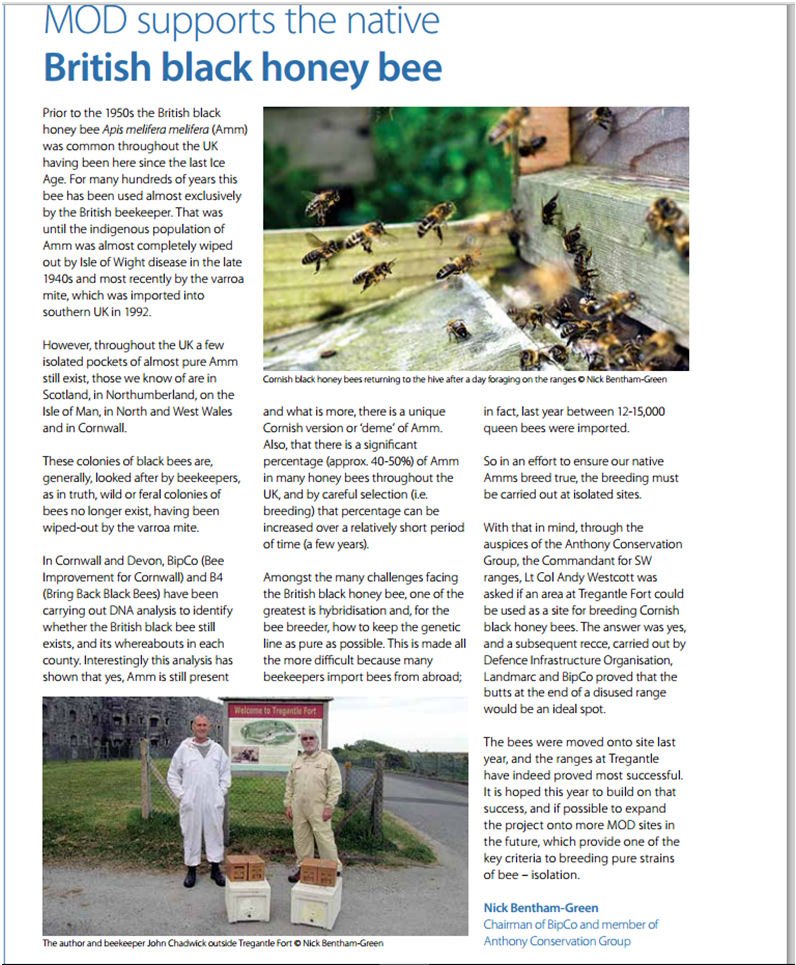 In January 2014 BIPCo (The Bee Improvement Programme for Cornwall) held its 3rd Annual Bee Improvement Day. All three annual events have been stimulating days, inspiring and encouraging beekeepers to set about selecting and improving their bees. At the most recent event Robert Jones, bee farmer and champion of the native bee, came to talk to us about his methods of improving and breeding the honey bee. The farming background to the methods used was obvious, and the use of ‘stockmanship’ with bees as with any other livestock was a revelation.

Stockmanship in farm animals involves the management of breeding stock to produce the qualities that we are looking for. In sheep, for example, one would look for a ram with a certain quality that may be missing or weak in the flock. By crossing with this ram, this particular quality can be introduced and then selected for in the sheep produced in the next generation.

Most of us thought that bees were different as we have resigned ourselves to having less than perfect control over the male line, unlike in farm animals where the breeding male is of such importance. In January we were told that the emphasis on improving our bees should be on the drone. It is easy to focus almost entirely on the selection and rearing of queens but until we appreciate the important role of the drone, and how to manage it, our progress will be limited.

An explanation of how we can manage our drones and achieve the matings we require was given but, as in any lecture, there is a difference between explanation and actually seeing and understanding it for ourselves. The obvious answer was for use to take a trip up (or down) to Pembrokeshire and see for ourselves how things work, and also to see the results that were being achieved. We were kindly invited to visit for a weekend.

A date in July was settled on and seven of us made the journey in two vehicles. The whole weekend was made extremely pleasant by the hospitality shown to us and by a series of visits to some of the best eating houses in the County. However we were here to see the bees and perhaps more importantly to see how the system worked and what was being achieved. As in the lecture in Cornwall, the whole emphasis was on the drones and how to get the queens mated with the right drones. We were taken to various viewpoints to study the topography and to be given an explanation of how, through the use of microclimates, matings will take place with the selected drones in the area.

The general principle is that a site is selected within woodland in a steep valley and where high winds are common above the shelter of the valley. A clearing in the valley together with the height of the trees provides a flying area for the queens and drones like a 50 foot high funnel. The queen’s mating flights take place within this area and excellent control of the drone line is achieved. The principle seems to be quite different to that of the drone congregation areas which we are told form in spells of warm settled weather, presumably this makes use of ‘apiary vicinity mating’, something not recognised on the Continent.

The qualities of the bees are maintained and improved by the use of different apiaries specialising in different characteristics. For example one apiary may be dedicated to ‘non-swarming’ bees, another to ‘docility’ and so on. There was even one apiary with slightly more defensive bees as this may be a useful quality (as bees do need to defend themselves at times). By having one main quality to maintain and refine, results become much more achievable. Each line is maintained separately but is also used to cross with other lines to strengthen a particular characteristic within the bees. So the resources are there to develop a balanced bee which will perform to a high standard.

So, what were the bees like? It has to be said that we were all very impressed with their qualities, docile, low-swarming and very productive – and the queens maintained productive colonies for 4 or 5 years. It was a tremendous advert for the native bee and what could be achieved. One was left wondering why anyone would advocate the importation of bees.

Overall, it was a real eye-opener. I feel as though I have got to grips with the basics of bee improvement but this showed me that we can take things to another level and actually carry out ‘bee breeding’ with our bees, as with farm animals, and without any high-tech methods. 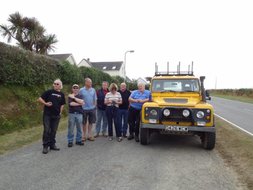 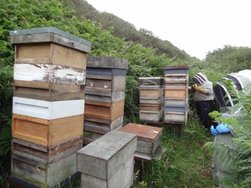 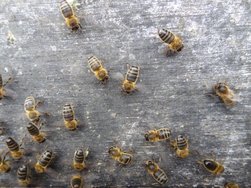 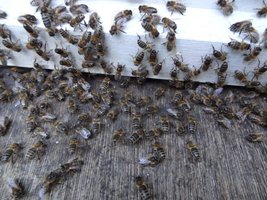